I’ve been experimenting with caseins recently. I got some after I read the amazing James Gurney’s posts and watched his videos about the paints. (I rather wonder how much sales of caseins spiked after he blogged about them.) They’re fun! 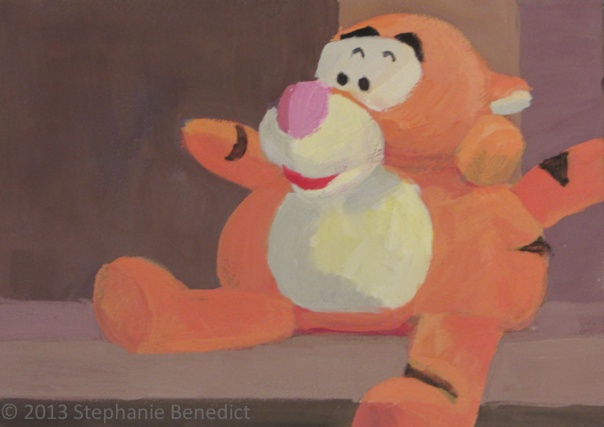 They’re a bit like gouache, in that they are an opaque, water-soluble medium, but they seem to me more flexible. You can thin them to do washes, or use them fairly thickly. They dry to a soft matte finish. But they’re also sort of like oil, in that you can mix them wet-into-wet if you work quickly. Gurney calls them “oils on steroids,” but I’m not sure I agree. I think they’re more like gouache on steroids. But they also share a feature of acrylics: they change value once dry, generally turning darker. Since values are something I struggle with, and therefore focus on, I find the value shift annoying.

But, not enough to stop me from playing more with them!

Posting will be intermittent the next few weeks. I’m trying to finish up some larger pieces for a show, and to get ready for some trips.

I finally got myself to Malakoff Diggins State Historic Park to paint last week. It’s been something I’ve wanted to do for some time, and we got a relatively cool-ish day so I packed the car and drove the two-plus hours from my house. (Far nice than this weekend, which is another scorcher*.) As I drove up into the foothills on ever narrower roads, I kept thinking about the truth behind Sacramento’s big claim to fame: it really is just two hours from anywhere. The weekend before, I’d driven two hours to San Francisco.

Malakoff Diggins is the site of the largest hydraulic mine of the California gold rush. Huge water cannons were used to literally wash away the soil overburden and expose the gold beneath. It’s a terribly destructive process that washes away mountains, leaving badlands behind.

Today, Malakoff Diggins is recovering, sort of. The mining generally ended in California in 1884, after a legal battle with farmers downstream, where the sediment washed down from the mines changed the rivers and caused flooding**. In the intervening years trees have grown where there is soil. The valley floor is covered with marsh, even in this dry year. The mountains of course will never regrow; there will always be scars from what the humans did here.

But those scars are both fascinating and beautiful. I’ve long wanted to paint the scene, so I set up my easel in the shade of a Ponderosa pine. The air smelled of pine and manzanita. I sketched for a couple of hours. I didn’t intend to do a complete painting; I just wanted to record the colors for reference.

Now, I’m back in the studio working on the painting. It will be 30 x 40. Here’s a shot of the underpainting, done with acrylic paint mixed with gesso. This is actually my favorite part, probably because I really can’t mess it up yet. The only down side to this is that I have to wait overnight to start the oils, because I need to let that gesso dry thoroughly, and I’m eager to work on this one. I’ll keep you posted on the progress.

What hidden gem of a park is close to where you live?

*I talked to a friend who is actually is a weather forecaster in the Navy reserve. He thinks that the next few decades will be notable for NOT having a “normal” weather, but rather by increasingly chaotic weather patterns. He may be right–the system cannot stabilize while we keep pumping energy into it. I think that we all need to get used to this extra heat.

**But it’s still practiced in other places around the world.

The de Young Museum in San Francisco is on a roll. In the past three years or so, the de Young has hosted some amazing art exhibitions, with still more in the queue. The latest in this string of must-see shows is Diebenkorn: the Berkeley Years 1953–1967. Richard Diebenkorn lived and taught in the Bay Area, where he influenced Wayne Thiebaud and worked with or knew Elmer Bischoff, David Park, Nathan Oliveira and others.

Now, I’m not much of a fan of Bay Area figurative art, or of mid-century modern art in general. Abstract art isn’t my thing. I tend to come down on the side of the Beautiful in art, not the challenging. Indeed, before we went into the Diebenkorn exhibit, my friend Steven and I meandered through a small collection of modern pieces in one of the museum’s other rooms—and I felt like I was in one of those New Yorker cartoons of a woman standing in front of a piece of modern art grumbling “I don’t understand this.” I’m sorry: casts of tire treads in clay and binder mounted on a wall? Never mind if Robert Rauschenberg did it—why is that art?

And yet… The Diebenkorn show really struck me. Some of his abstracts are clearly landscapes: he admitted as much himself. The figurative pieces from the late 1950s are harsh, gritty, sometimes ugly. There is a palpable sense of alienation in those pieces, as if they were actively pushing the viewer away. But if the alienation is palpable, so is the life force. The energy. The furious scrubbing and layering and scraping of the paint. This is not Bouguereau’s invisible brushstrokes, or Monet’s calm deployment of paint (I’m thinking of the water lilies here). This is more like Van Gogh’s frenetic brushwork, only released to make its own abstract way.

The show is set up more or less chronologically. The alienation passes, the paintings calm down—still abstractions, but less driven, less hemmed in. The works become explorations and contemplations, whether they are just a coffee cup on a table, a pair of pliers, or a woman sitting in a chair. The final pieces on the exhibition show the clear influence of Diebenkorn’s trip to the Soviet Union and of seeing the works of Matisse.

It’s a fascinating show. I learned a lot about art, about painting, about trusting the medium more. And now I want a studio where I can paint much larger works!

Have you seen the Diebenkorn show? Do you prefer abstract art over representational works? Why or why not?

I’m happy to report that one of my paintings, Colusa Marsh (Snow on Snow Mountain) will be included in this exhibition.   This is the second exhibition of the Greater Sacramento-Sierra Chapter of the California Art Club.

The gallery is at the Three Stages at Folsom Lake College.  Since this flyer was published, the venue has been renamed the Harris Center at Folsom Lake College.  It’s a theatre complex in eastern Sacramento County intended to rival the Mondavi Center in U. C. Davis.  The gallery is tucked away in what appears to be an extra space next to one of the theatres.  Which means–it’s open very limited hours:  Tuesday-Thursday 10:00 a.m. to 2:00 p.m., plus an hour before every performance and during intermissions. Still, this show will be worth seeing, if I do say so myself!

Why do you paint?
For exactly the same reason I breathe.
That's not an answer.
There isn't any answer.
How long hasn't there been any answer?
As long as I can remember.
And how long have you written?
As long as I can remember.
I mean poetry.
So do I.
Tell me, doesn't your painting interfere with your writing?
Quite the contrary: they love each other dearly.
--e.e. cummings